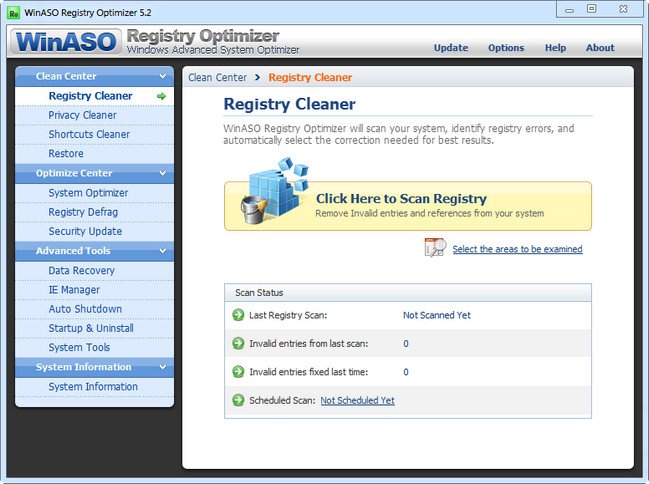 WinASO Registry Optimizer is an advanced registry cleaner and optimizer for Windows that allows you to safely clean and repair registry problems with a few simple mouse clicks. It scans the Windows registry and finds incorrect or obsolete information in the registry. By fixing these obsolete information in Windows registry, your system will run faster and error free. With a few easy steps, WinASO Registry Optimizer will scan your entire registry for any invalid entries and provide a list of the errors found. You can then choose to clean each item or automatically repair them all after making a backup.

WinASO Registry Optimizer can restoring Internet Explorer setting, including IE Home Page, IE Window Title, etc. Your Windows registry keeps growing every second when you use your computer! It continuously records all the information and changes of software, hardware and system settings. Over time, your registry will be accumulated with a large number of obsolete, redundant and invalid entries and registry holes, which seriously affect your PC performance.
But editing and cleaning registry items is not only a time-consuming job, but a highly risky one. Improperly modifying registry items may affect your system running or even cause severe system damages.

Back to Windows Apps

Also tagged with one or more of these keywords: WinASO, Registry, Optimizer, Portable

0 user(s) are reading this topic